From Home and Design

Spotting an ugly duckling in a desirable neighborhood isn’t difficult—but precious few can envision the swan that will emerge after an extensive renovation. The bird in question is in Chevy Chase, Maryland, and its original configuration was an architectural puzzle—a conglomeration of styles that included the characteristics of a rambler combined with classical elements like dentils under the eaves. “We wanted a modern house,” says the homeowner. “Our previous house in Bethesda was a center-hall Colonial and very traditional.”

The owner, an attorney, and his wife hired Fernando Zúñiga-Pflücker of Baltimore-based plan Z architects to design a renovation that would update the circa-1960s house, transforming its traditional interiors and giving it greater openness and visual consistency within the original footprint. They tapped Finecraft Contractors; both firms had worked on previous remodeling projects with the owner. “They told us they wanted to give the house an exterior facelift and create a modern look,” says Finecraft principal George Papaheraklis. They also wished to convert the attic into a real second floor for the master bedroom suite.

The house is built on a downward slope, so the ground-floor rooms are elevated at the back. “The house had good bones but a very peculiar layout. It didn’t really fit into any design scheme,” Zúñiga-Pflücker recalls. To open up the floor plan, he removed most of the interior walls. On the main floor, the front entry provides a direct line to the living room past a staircase to the second floor. The living room adjoins a light-filled, open-plan kitchen/dining area/family room where a vaulted ceiling—borrowed from the attic—is clad in tongue-in-groove wood panels. New windows are carved into what used to be attic walls.

In the living room, Papaheraklis was tasked with replacing the traditional fireplace surround with a clean-lined, modern version made from a single slab of marble. “We wanted it to look monolithic, with no visible seams,” he says. Once the slab was selected, the builder cut a three-sided section out of the middle and adhered it to the wall as one piece.

The formal dining room became a cozy library where wainscoting and floral wallpaper have been replaced with built-in cabinetry. The closed-in staircase now boasts wider treads and a steel-cable bannister that kept the contractors on their toes. “All those parts had to be ordered separately and you have to be very exact to make it fit,” explains Papaheraklis.

The kitchen was expanded to occupy an elevated porch that once overlooked the backyard. Rockville-based Elite Kitchens helped design the layout, in which white, Shaker-style cabinetry combines with gray granite counters and KitchenAid appliances. Although Zúñiga-Pflücker usually dislikes kitchen islands, he likes the way this one works. “Many times the island turns into something you have to walk around,” he observes. “This island is minimal but effective.”

In order to create a full-height second floor, Papaheraklis and his team raised portions of the roof significantly and gutted the space to accommodate a spare bedroom as well as the master suite, complete with a covered balcony at the front of the house. The upstairs hallway overlooks the kitchen/family room; two ground-floor bedrooms have been converted to home offices.

The owners can also enjoy the views from an elevated outdoor deck that wraps around the chimney at the back of the house; it’s accessible from the living room through French doors. “That was my wife’s idea,” says the homeowner. “It gave us an easier transition to the outdoors.”

Although the home looks compact from the street, it stretches to more than 4,000 square feet and has grown from four bedrooms to five. At the front, overhangs above the entry and balcony are accented with pine boards stained a warm honey color. Brick exterior walls have been painted a rich cream color. The owners extended the modern aesthetic with clean-lined, contemporary pieces sourced by Janice Kanter of Theodores in Upper Georgetown. Red oak floors throughout are stained a dark, mahogany hue.

After a year of construction, the renovation was completed in May 2013. Everybody on the design team is happy with results that transformed a series of poorly laid-out rooms into a design that defines good flow. “I love the openness, “says Zúñiga-Pflücker. “The spaces just open up to you.” 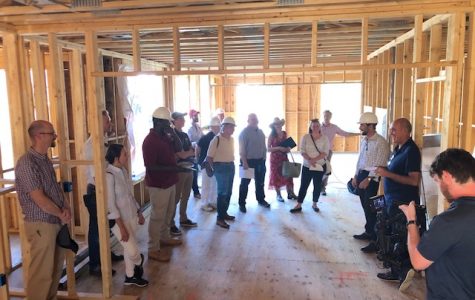 FineCraft Contractors Had a Successful Construction Tour at Capitol Hill 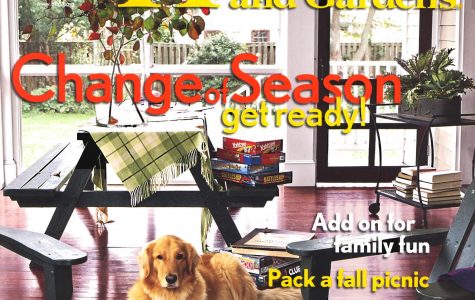 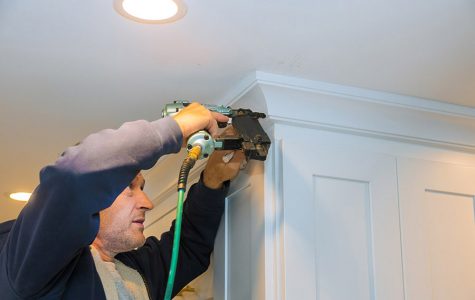 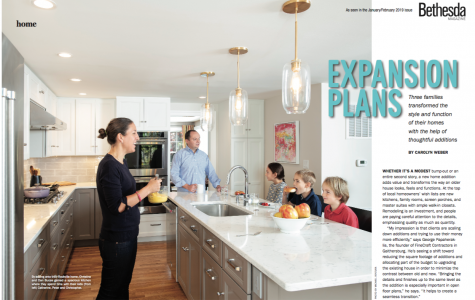 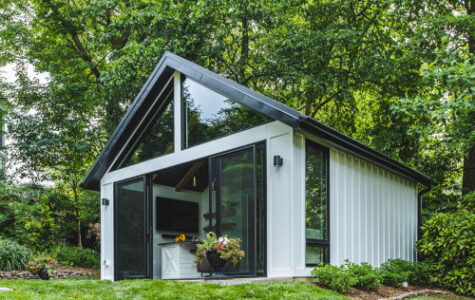